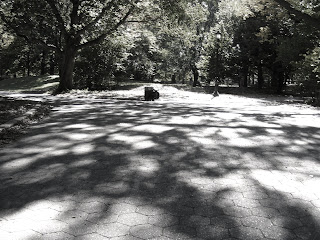 one of my favorite songs of ALL TIME! "no rain" by blind melon:

i still need a hug

i need a hug

i can't believe i haven't blogged since tuesday!

clearly, my life hasn't been too exciting. or maybe just the opposite! HA. yeah, right.

so my memory is getting terrible and i had to look at my last few days' tweets to figure what i had been doing...

on weds, devin called and we talked for like an hour. so that was fun. i wasted the rest of the day watching True Blood and doing idontknowwhat.

thursday after class i went walking around in search of a cheap mask for the masquerade party on friday. although i did find a nice one for $13, i wouldn't have bought it if i had known that i would wear it for about 10 minutes, take it off because i was hot, accidentally rip off one of the straps, set it down on a chair somewhere, watch numerous people wear it, and find that it had disappeared after a few hours. so yeah.

thursday night i called caitlin and we talked for a whiiiiile, which did wonders for my soul.

friday [in the afternoon] i chilled/wandered/freaked out about not being able to get cash out of the ATM. but it worked out eventually. i really need a job.

and then... the "lingerie masquerade." i don't really even know if i want to, or should, explain. i mean, it wasn't quite a masquerade because the few of us who did have masks only wore them for about 5 minutes [except gen, who wore his batman-esque mask all night]. and it wasn't quite a lingerie party because only some of us were wearing less clothing than normal... or some people, after a while, went and put more clothing on. it got even stranger when more non-floor people started showing up that WEREN'T wearing any sort of lingerie. it was awkward... and then the dancing stopped completely because the RAs said that it needed to be quieter [although it was still before quiet hours!]. and i think the fact that not everyone had pregamed beforehand made it awkward too. and i know i felt weird too because a few people were clearly hooking up, or desperately trying to, and i wasn't a part of it. i mean, it was just one of those times when you pause and think "this is really happening? this isn't a movie?" gosh i hate how cliche life is. and although i've been going outside my comfort zone, and going against my nature, to be more outgoing and hang out with more people... it's just not working. idk, maybe last night just wasn't a great night. it was just "one of those times"... so strange... i just felt more out of it, more out of place, than i should have.

and i suppose wearing contacts for the first time in about three years didn't help either.

whatever. i don't even want to think about what's going on tonight. sometimes i really hate the city... and society. it's so fucked up.

and i have two papers to write.

i got two packages today. i was happy.

so sunday i grounded myself again. when i was off by myself, i wandered into b & n and ended up in the religion section. buddhism, in particular. long story short, i thought back to senior year bible class - you know, worldviews & religion... so yeah. i feel like i should have an entirely separate post for this.

yesterday i had my last midterm - cultural foundations. i think i did well. i should get an A- at the least. then after class, shritee and i headed to brooklyn for our writing assignment. our next essay is about a place we know or want to know... it's really abstract. anyway, we decided to go to prospect park. 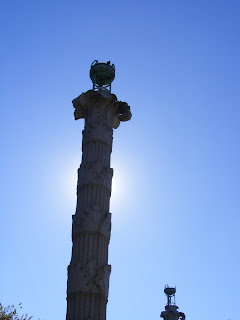 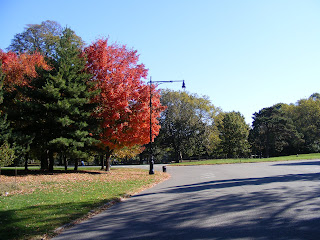 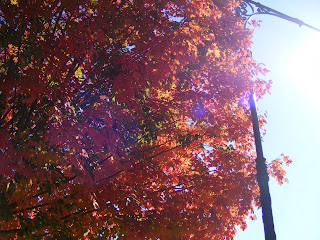 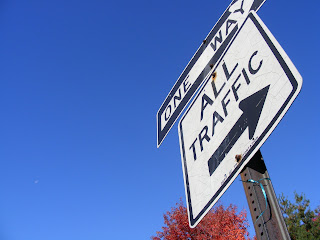 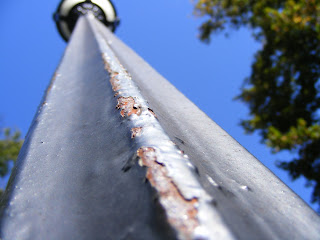 we got falafel afterward and sat outside of stern and people-watched.

then in the afternoon/evening, i hung out with elaina. she handrolled cigarettes and we went on an adventure. we also ate soup, drank coffee and did laundry. oh, the daily show and the colbert report as well.

today i was practically asleep in my first class. oOo we got back our midterm for social foundations [philosophy] ... freaking 84, B. my professor is so geekily and sexily impossible. so far i think that has been my highest grade in the class... so i think i'll end up getting a B for the semester. it's such a shame... i have the biggest crush on him : /


"I’ve been walking in the same way as I did
Missing out the cracks in the pavement
And tutting my heel and strutting my feet
“Is there anything I can do for you dear? Is there anyone I can call?”
“No and thank you, please Madam. I ain’t lost, just wandering”

serezha is my nine-year-old russian boy of the day.

so today i was in a random book-reading mood. instead of reading anything i need to read or anything i have been reading lately, i wanted to read something i hadn't read in a while. so i picked up anna karenina and began where i left off [about halfway through]. i had forgotten how much i loved tolstoy's writing. i don't know, he portrays family life with all of its inner problems so well. there's so much insight in every chapter and, daresay, on every page. not to mention he's opened my eyes up to Russian culture and lifestyle. just some things i noticed/remembered today. to share a quote:

"he was nine years old and quite a child, but he knew his soul, it was dear to him, and he guarded it as the eyelid guards the eye, and never let anyone enter his heart without the key of love" [552]

idk, just simple things like that scattered throughout the page/chapter/book really help shape the characters and set the tone.

it sort of bothers me that people will read my blog and tell/talk to me about it later, but they won't actually comment. if you read this and you have something to say or you have a question, please please leave a comment. that's why they exist. anyone can comment, you don't need a blogger account or anything. hell, you can always be Anonymous if you want. so, please don't be afraid to talk to me =)
Posted by alia at 12:33 AM 2 comments:

i may not flunk out of college after all!

so i feel like i need to fill you all [all 2 of you...] in on the good things that have been happening to me:

yesterday:
1) turned in my 6 pg paper - aka no more worrying
2) got the highest grade [A!] on our first paper in Writing - and because this is MY blog, i'm going to be conceited for a moment and show you what my prof wrote at the end: "this is such a strong essay that, even against my better judgement, I had to give it the highest mark! Your writing is terrific - smart, insightful and thought-provoking. Your writing shows a deep understanding of Appiah and a real commitment to understanding your own self. You might've further emphasized the 'change' you mention, socially, but that might be more a flaw of the thesis itself. Great work overall! I loved reading this!"
professor fitterman, kwame appiah, you both are awesome =)
3) i received the scarf soogie got me in korea!! yay!
4) i spent hours watching tv online instead of doing philosophy homework - yes, i consider that good... even though my grade will suffer...
5) i talked to jenn on the phone and laughed sooo hard. good times...

today:
1) got my middle east cultures midterm back and found that i got a B - which is A LOT better than i thought i had done
2) had philosophy aka got to look at my philosophy prof for a good hour and fifteen minutes LOL and all we did in class was talk about politics. ok, we did talk about aristotle a little at the end
3) iced soy chai - nuff said [HA]
4) it's the weekend!
Posted by alia at 2:27 PM 4 comments:

i found these today 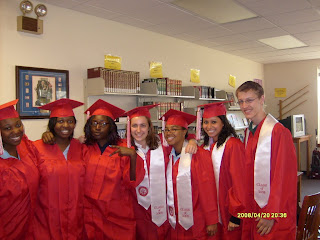 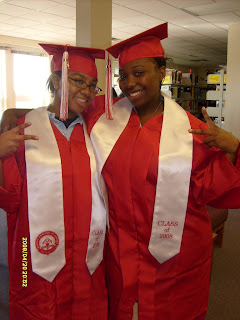 the day we got our caps & gowns. it was really convenient that we had study hall haha.

back in the city.

so instead of actually writing my 6 pg paper this afternoon, i watched episodes of ugly betty and desperate housewives. i was actually really saddened/outraged with the whole vegetarian issue in DH. bree couldn't accept the fact that her grandson was a vegetarian, and tricked him into eating meat! etc etc. whatever, it was just really off-putting to watch as a vegetarian... but ugly betty was even more enjoyable. i wanted to see more of jesse, betty's new neighbor! [for more info, see bri's blog lol] mmmm "VERY NICE"

so i keep finding ways to distract myself. i had originally told myself that once those ^ shows were over, i'd close the internet browser and give my full attention to this paper... but nooooo. i've spent the last hour or so [i really don't know how long it's been] searching for something else to "listen" to while i write aka i've just been looking for vidoes i'd watch on youtube and other tv shows... anyone have any suggestions? lol

in other news, i'm getting hungry but i don't feel like going downstairs to get food that i don't even really want [aka weinstein sucks compared to hayden] : /

video of the day, week, whatever:

updating from my phone

oh yeah, that makes me so cool. HA.

spent the morning and early afternoon lusting after a sergeant/major/idk/? with the cutest 3 yr old son and random hot black boys. saying goodbye to bowie was so hard =( lol

i've decided that I know the coolest 40 yr olds. EVER. the fam just rolls like that...

[insert image of me screaming here. seriously, my computer hates me]

i'm stressing like hell, and seriously reconsidering the dropping-out idea.

^words from one of my new favorite mexicans, heber (who also happens to be getting it on right now - at this very moment - with alicia. ya, news on the floor spreads quickly.) "nasty" is also used quite frequently in the place of "crazy"

VP debate was amusing. palin only referred to mccain as a maverick about 352681 times.

friday I semi-shopped aka got two $5 scarves and a few things at a street sale.

hookah two nights (thurs & fri) in a row was nice, but i'm (not so) slowly becoming poor.

today/saturday I hung out with a couple people from my writing class and had the most amazing frozen yogurt.
afterward the floor went to the cemetery & katz...

tonight was fun. anytime there's a lot of people, alcohol, and a trip to Insomnia, the night is destined to be good.
Posted by alia at 3:11 AM 1 comment:

that's right, hos! PUT DOWN THE BURGERS AND CHICKEN NUGGETS!!

this is a good rant.

so last night i went to "voices of a people's history in the united states", a program in the hip-hop theatre festival... a few of the people there:

i was going to say something else, but i forget now...

VP debate tonight! this is about to be hella funny.
Posted by alia at 6:05 PM No comments: