i put on a sweater because the a/c's too high, and it smells like winter
itches like cold breezes on bare branches
earlier i made banana nut bread, filled with aromas of autumn, cinnamon and things
caught in a vortex of inconvenient time, with the green fingers to prove it
nails short for working
the doctor said something about christmas and i nodded but i didn't want to think about that yet,
not ready for the lights and the snow and the ho ho h...
he brings home fresh berries, and i eat them up, suspended in sweet bitter bliss of purity
simple is all we're really looking for, things like a scoop of ice cream and airy vibrations from speakers, from throats
books shutter, fall in movement, take me back to years forgotten, aged ages,
youth caught in sweet bitter memories, flow of distorted life, the worn out greens changing to worn out golds to worn out nakedness to worn out birth
internalized lies, confused in the honest daylight and squished into beet burgers, a dark cold of summer, chill at beach
the transcending vanilla, drop dropping into the recipes of life, mixes of bread and things,
freezing bed on a starry humid night
Posted by alia at 10:33 PM 1 comment:

the words, they're already there, before i even write them
we are one in the same, though different in so many ways
i'm here, she's there
east and west coast, miles apart
but these pages and these thoughts bind us so close
that it almost frightens me, to be wrapped in such
sameness
to smile at the reassurance, to know that my thoughts aren't always so
futile
the pondering of skype, road trips, escapes
thoughts to make our sentences and trinkets and cds stronger than they already are
stronger than they need to be
sturdier than they should
be in such a world, worlds of lists and complaints and bitching and human things
worlds of dysfunctional families and imperfect friends and awkward encounters
lines and lines of confession, tragedy, memory, happiness
i know what you mean, five words that flow out of my pen so easily
you're wonderful, words that lighten my eyes and fill my heart so quickly
all of the inbetween things, phrases, scribbles, that complement my soul just right
and complete my day just enough
the i love you written so honestly and simply

i got a letter today. have i mentioned how much i love sending and receiving mail? genevieve, you'll have to give me your address in arizona once you're settled in so we can start the penpal-ing.
Posted by alia at 8:48 PM 1 comment:

their relationship was a bit complicated, always
but it worked magnificently
a cheap sort of therapy, a mellow neurosis
she would complain and he would ignore
he would despair and she would doubt
it was beautiful, really, the mess of it all
one day they woke up and just knew
they could feel it in the creased newspaper
and taste it in the bitter coffee
pause between forkfuls of egg, bites of banana
that morning they thought they knew
she said, we should break up
at the same time,
and i kid you not, the timing was perfect, we live in such a humorous universe,
at the same time he said, we should get married
the coffee was bitter indeed, the universe hilariously witty
they both said what and
in those days they were both trapped
something so horrible and perfect,
how do you let go
they would think that to themselves,
how can i let go, they thought
they eventually let go, of course,
days months years passed, who cares
the time doesn't really matter
does it
they moved on to other terrible, magnificent relationships
they moved on to other people with other problems
and their lives separately fell into chaos, beautiful messes
they never found happiness again
Posted by alia at 2:18 AM 2 comments:

bummer. moment of depression. whatever.

the professor of one of my favorite classes ever ever emailed us to tell us about the class she’ll be teaching in the fall. i’m momentarily depressed that i’ll be leaving. her class was honestly the only thing i really enjoyed while away from new york; and it was the only one that challenged, inspired, and “enlightened” me. i was able to look at literature in a completely new light, while at the same time focus more deeply on themes that already interested me. she’s absolutely wonderful, and since the end of the quarter in march i’ve been regretting not showing her my full potential. that class was the only thing that made me even consider that my life in ohio could work. the fact that this little email is making me question, almost regret, going back to nyu is blowing my fucking mind. how do you walk away from such talent, from the person who may be the greatest teacher of your lifetime? how do you walk away from a life that may turn out better, be more positive or successful, than the one you’ve so desperately dreamed about? shit, guys.
why do i always make horrible decisions?
i mean, i know the class is only 10 weeks and we're not going to be best friends and my professor isn't going to decide the rest of my life, but it's about what it symbolizes, you know? if i can find some happiness, some direction, some clarity here, then why the fuck do i need to search for it in new york? why follow a path i don't need, or maybe don't want, to go down?
again, why do i always make horrible decisions?
Posted by alia at 12:00 AM 2 comments:

not fun.
i've been feeling so uninspired.
oh phewy. 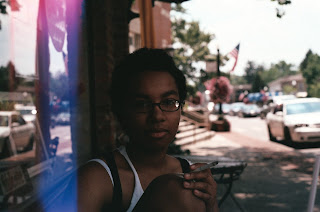 BUT got a couple rolls of film developed.
c'est moi.
Posted by alia at 7:14 PM 2 comments:

this tshirt smells like skunk and
i've been writing the same reminders on my hand for a week
what happened to all the paper
kerouac last week, austen this
a skunk today
mom likes my favorite band, and
the way my new clothes fit
two sizes, two sizes
let's make it three or four
i've been dreaming about how cemeteries and boys can
fit into my complex convoluted world of storytelling
is it too simple, is it too forced
she ran her fingers through my hair as i drove and
i didn't feel a thing but it was wonderful
to know that you're something beautiful and special
i wear the same things and write the same words and
pretend to be someone else, every day
Posted by alia at 11:22 PM 2 comments:

it was in the middle of that drab summer that she began to think about it
in between batches of cookies, in the midst of blueberry scones
she felt it may be her only contribution to society
the idea rose like dough, bittersweet
when did i become like this, she thought
my soul is too fragile for this, she thought
she tried to wash everything away with cups of tea and imaginary characters
figures dancing on screen
she grabbed her bags one afternoon, careful to remember the notebooks
things just don't make sense, she thought
what am i here for, she thought
she met a man in a diner
he was nice, with a faded hat and a faded tshirt to match a faded life
they were talking and he asked about the cookie she was eating
is it good, he said
i'm thinking about getting chocolate chip i figure chocolate chip is always good, he said
she wasn't aware of diner etiquette but she wanted to be honest
it's ok, she said
not to be rude but i make pretty good cookies, she said
oh, he said
he was quick to catch on
so it's not as good as your cookies huh
well maybe then you can make me some sometime
yeah maybe, she said
why am i still here, she thought
black coffee replaced tea, greasy eggs and truck drivers replaced whatever entertainment her life had known before
steamed away problems in the hot corners of the kitchen, sweating, pausing between batches
things are so easy here, she thought
when a few muffins brightened old norma's day or when faded hat bought her ice cream and insisted they watch the stars
it was in the middle of that drab summer that she began to think about it
and it was in the middle of that drab summer that she came to life, died, came to life, died

oh god and that face, he says, it lit up with the fireworks
and i swear, she glowed brighter than them
i listen patiently, nod and smile
and wait for the moment when i'll be magical enough for him

just a little something i thought of last night while watching some fireworks. it's like we look up at these things in the sky, but what about the fireworks within each of us? they light up the sky with this amazing glow, and i just sort of thought about how we do the same with each other.
Posted by alia at 1:33 PM No comments:

declare independence, don't let them do that to you
the words screamed at her
but i don't know how, don't know how, she thought
all i have is this red blood and these blue lips,
the white remainder of a burned flag
raise your flag, higher, higher
the woman told her
her arm hurt, but she lifted, lifted
until the flag was high enough
and the decorations were in order
she said, protect your language,
make your own flag,
ignore their patronizing
covered her ears, turned away from the boom boom crackle
go to the top of your highest mountain
she found the fridge, ice for the wound and beer for the memories

i don't know if this makes sense at all. i was listening to bjork's "declare independence." yeah i'm pretty certain this doesn't make sense.
Posted by alia at 3:40 PM 1 comment:

all of this, she said, it just makes me want to make blueberry pie
what about everything else, he asks
what do you mean, ‘everything else,’ nothing else really matters
he shakes his head, straightens the tablecloth, well are you going to make another one
no, she’s shaking her head now, eyes hovering over the golden tops of the pies already dominating their tiny kitchen’s surfaces
she’s letting all the cool air out, he thinks, the way she’s standing in the doorway, she should move
but he doesn’t say anything
instead he thinks about apple pie and hot dogs and decorations
didn’t you love this time of year when you were a kid, he asks, you know, the fireworks and sparklers and food, he says, wasn’t there a parade
yeah i guess, but

feel free to tell me your interpretation of this. i want to know if it's too ambiguous and needs some "bridging." but you guys are smart and probably get it. but still. pretty please. i'll [try to] make you a blueberry pie.
Posted by alia at 10:25 PM 1 comment: